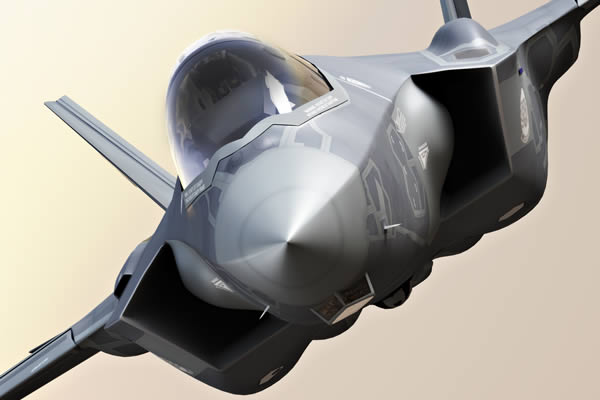 IBC’s Beralcast Alloy is Flying on the F-35

IBC now produces a crucial advanced beryllium-aluminum alloy component for the F-35 Lightning II, under a contract with Lockheed Martin. This IBC-made component is known as the azimuth gimbal housing unit and is used in the F-35’s Electro-Optical Targeting System (EOTS), which is Lockheed Martin’s affordable, high-performance, lightweight, multi-function system that provides precision air-to-air and air-to-surface targeting capability. The low-drag, stealthy EOTS is integrated into the F-35 Lightning II’s fuselage with a durable sapphire window and is linked to the aircraft’s integrated central computer through a high-speed fiber-optic interface.

Beryllium-aluminum alloys allow the F-35’s EOTS system to acquire targets at longer distances than would be the case with other materials. Beryllium-aluminum helps to dampen vibration and signal noise to the EOTS system, which enhances the electro-optical resolution range.

“We are pleased and proud to have been awarded a third purchase order from Lockheed Martin for the EOTS azimuth gimbal housing on the F-35 Lightning II, and at a level that represents a significant increase over the previous two LRIP orders combined,” said Major General Duncan Heinz (USMC, ret.), President, CEO, and Director of IBC. “Our proprietary Beralcast® beryllium-aluminum casting alloys deliver the exceptional performance demanded by the F-35 platform and help to reduce costs for this system over traditional technologies. We look forward to serving Lockheed Martin and other defense and commercial equipment manufacturers with custom manufactured Beralcast® components.”

The F-35 Lightning II, a 5th generation fighter, combines advanced low observable stealth technology with fighter speed and agility, fully fused sensor information, network-enabled operations and advanced sustainment. Three distinct variants of the F-35 will replace the A-10 and F-16 for the U.S. Air Force, the F/A-18 for the U.S. Navy, the F/A-18 and AV-8B Harrier for the U.S. Marine Corps, and a variety of fighters for at least 10 other countries.