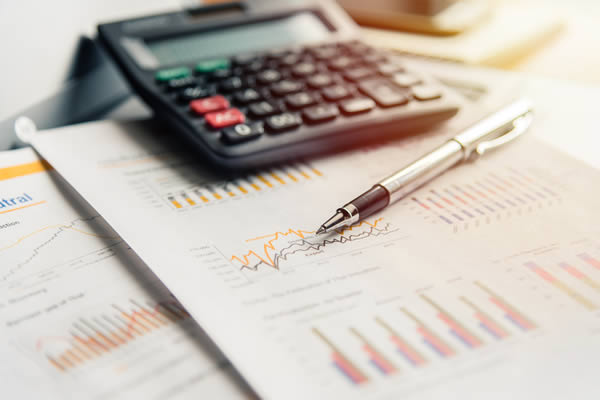 Highlights of the Quarter
(unless other noted, all financial amounts in this news release are expressed in U.S. dollars)

The Company posted stronger year-over-year (“Y/Y”) sales revenue in the quarter, as well as higher gross profit and expanded gross margins. The Company failed to achieve profitability in the period primarily due to a shifting of Engineered Materials division product deliveries out of fiscal Q1 of 2019 for a specific customer. This was necessary while the Company and its customer worked through engineering matters related to acceptance criteria. Those issues have now been resolved and shipments of product to the customer have resumed at an increased rate during the remainder of FY2019 to complete the order.

“The first fiscal quarter of 2019 showed improvement over the same quarter of last year, but it was not a profitable quarter and we missed our mark,” said Major General Duncan Heinz (USMC, ret.), IBC’s President and CEO.  “However, I see IBC continuing to progress toward a profitable year in fiscal 2019, which would mark the first year of profitability since the Company was formed in 2007.”

“Copper Alloy division revenues increased substantially year-over-year, with more than double the gross profit and gross margins of the comparable period of fiscal 2018, and Copper Alloys posted an operating profit1 of $60,000, compared to a year-ago loss of $269,000.  The Engineered Materials division’s revenue miss in the quarter was due to acceptance criteria issues which required considerable coordination with the customer, and that slowed down our production process.  That issue has been resolved and deliveries have resumed in Q2 at increased quantities.  Those increased quantities will continue for the rest of the fiscal year in order to complete the order on time.  The loss in this division should reverse during the remainder of the fiscal year with the increased shipments.”

Major General Heinz will host an investor update webcast and conference call on Friday, November 30, 2018, at 8:30 a.m. Eastern to discuss the Company’s fiscal Q1 2019 interim financial results.  To register for the webinar and conference call, and receive instructions on how to call in or connect via the internet to the webinar, please go here:  https://attendee.gotowebinar.com/register/4573616922886120961

On a consolidated basis, the Company posted these results in the quarter ending on September 30, 2018, as compared to the year-ago period:

IBC’s Copper Alloys division posted these results for the quarter, as compared to the year-ago period:

IBC’s Engineered Materials division posted these results for the quarter, as compared to the year-ago period: 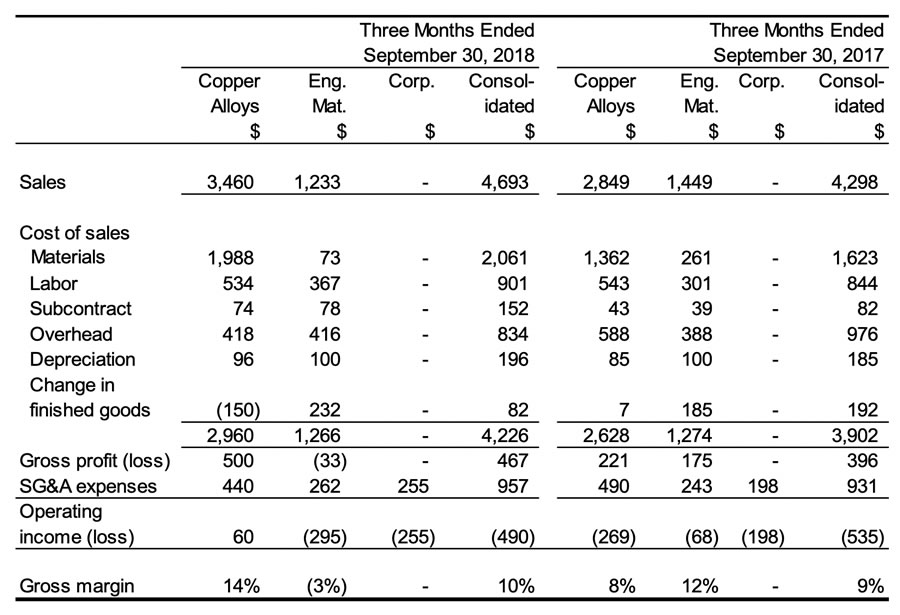 The Company’s interim financial statements have been filed on SEDAR at www.sedar.ca and are available on the Company’s website at www.ibcadvancedalloys.com.

To supplement its consolidated financial statements, which are prepared and presented in accordance with IFRS, IBC uses “operating income (loss)”, which is a non-IFRS financial measure.  IBC believes that operating income helps identify underlying trends in its business that could otherwise be distorted by the effect of certain income or expenses that IBC includes in loss for the period. IBC further believes that operating income (loss) provides useful information about core operating results, enhances the overall understanding of its past performance and future prospects and allows for greater visibility with respect to key metrics used by management in its financial and operational decision-making. Operating income (loss) should not be considered in isolation or construed as an alternative to loss for the period or any other measure of performance or as an indicator of IBC’s operating performance. Operating income (loss) presented here may not be comparable to similarly titled measures presented by other companies. Other companies may calculate similarly titled measures differently, limiting their usefulness as comparative measures to our data.

A reconciliation of first quarter loss to operating income follows:

On behalf of the Board of Directors:

[1] IBC reports non-IFRS measures such as “operating operating income (loss).”  Please see information on this and other non-IFRS measures in the “Non-IFRS Measures” section of this new release and in the Company’s Management Discussion and Analysis (“MD&A”), available on IBC’s website at www.ibcadvancedalloys.com and on SEDAR at www.sedar.com.

Neither TSX Venture Exchange nor its Regulation Services Provider (as that term is defined in the policies of the TSX Venture Exchange) accepts responsibility for the adequacy or accuracy of this release.  This disclosure contains forward-looking statements.  Forward-looking statements normally contain words like ‘believe’, ‘expect’, ‘anticipate’, ‘plan’, ‘intend’, ‘continue’, ‘estimate’, ‘may’, ‘will’, ‘should’, ‘ongoing’ and similar expressions, and within this news release include any statements (express or implied) respecting anticipated seasonality in the next quarter or two that may impact sales trends, expectations as to further value and savings of waste stream inventory, expectations as to additional quantities to be sold under the Lockheed Martin contract, beliefs as to expanding production capacity as a result of the purchase of new capital equipment and inventory and the success and timing of the production of components under the commercial satellite systems contract. Although IBC believes that the expectations reflected in these forward-looking statement are reasonable, forward-looking statements, by their very nature, are subject to inherent risks and uncertainties and are based on assumptions, both general and specific, which give rise to the possibility that actual results or events could differ materially from our expectations expressed in or implied by such forward-looking statement.  The forward looking statements made by the Company in this press release are based on its experience, perception of historical trends, current conditions, expected future developments and other factors it believes are appropriate in the circumstances.  As a result, we cannot guarantee that any forward-looking statement will materialize and we caution you against relying on any of these forward-looking statements.  IBC makes no commitment to revise or update any forward-looking statements in order to reflect events or circumstances after the date any such statement is made, except as required by applicable law. Additional information identifying risks and uncertainties is contained in IBC’s filings for the quarter ended Septemer 30, 2018, and in its Annual Information Form for the fiscal year ended June 30, 2018, available at www.sedar.com.